One thing about this artist is that she knows her strengths and makes the most of that by highlighting her stellar vocals and great pitch with sparse arrangements with piano and/or guitar, beats and accents of various kinds. One thing you’ll notice on her previous releases is that her voice is always the highlight of the song leaning on strong melody and vocal performance to carry her through. The song Falling is a good one to listen to to hear what I mean and is a fabulous song on its own . The melody and instrumentation have a very beautiful and Celtic feel.

Her song Smolder, another beautiful vocal oriented piece with rich piano backdrop, has the same Celtic underpinning.  As does the song “Wait For Me”. Scott puts all her heart and soul into her vocal takes, that much is obvious. And in that vein, as stated in her description of the song Wait For Me on her YouTube Channel, the description says, “we all make mistakes, but sometimes we don’t get to make up for them. ‘Wait for Me’ is a heart-wrenching plea for forgiveness. If you like any of the ‘Grey’s Anatomy’ soundtracks, you’re going to love this song!”

And the song is indeed heart-wrenching and continues with the sparse arrangement and emphasis on the vocal. After all, a lyrical song is all about the vocal and what is being sung. But this amazing vocalist is capable of much more than the sparse arrangements of Celtic underpinning, and she doesn’t leave it all there.

On Coco’s latest release “One More Life” the production gets more experimental with sounds and moves slightly away from the sparser arrangement style and takes on some more contemporary pop appeal. 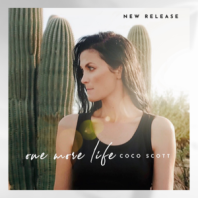 And it is a great success because the arrangements do not take away from the vocal but underscore it. On this song, which is my big focus here, piano starts as slowly the song builds and sequenced sounds appear – and then other sounds come in and build around the perfect vocal take and begin to pulsate by “Baby lets fly, I can’t wait another moment”. Electric guitar comes in just to make accents at this point. Then the beat picks up and pulses the song home even further while all is tastefully done and not subtracting from the vocal, but  rather, highlighting it!  The concept of less is more is working here as it has on other recordings of Coco Scott. Nothing is to intrusive. Nothing is overdone. Perfect arrangement.

Her voice is crystal clear like you are there in the room with her. A result of using very high resolution recording. Every syllable and consonant are crisp and clear and leave you hanging on the edge of your brain. One has to commend the recording engineer, as well as the singer, for capturing everything so well. Independent artists should take note of how well recorded this song is and use it as a vocal standard that can be achieved.

The song seems to be asking for “one more life”, “One more love”, which could mean another chance at love to perhaps get it right this time – as it seems perfect for once – a concept I think a lot of people can relate to. The line “Better late than never” says it well. The song is short and sweet coming in under 3 minutes as a radio friendly pop song should. It does what it needs to do and ends leaving you wanting to listen again, which I think is the ultimate goal of a song in terms of wanting more.

This song is much more preferable than much of what passes as pop that clutters the airwaves today. It is contemporary but it is it’s own thing. The music and luxurious tasty vocals are rich like the audio version of sleeping on custom satin sheets.

Hear/Buy One More Life on CDBaby:

Katie’s enthusiasm for music and singing has been consistent since an early age.  Following her dreams, working hard, and learning from her mistakes with an always upbeat attitude has helped her multi-task successfully as a musical entertainer and in fashion as a model.

Since her very first music release, and even since my last review of her music, she has come a long, long way, and like a fine wine, only improves with time.

She has that special “it” in all that she does that brings me to her Christmas song, which I pulled from her back catalog of other great songs.

Blessed with natural vocal talent and an ear for a good melody, Katie brings home the Christmas cheer easily with her song “You Are My Holiday“. I dug this song up by accident and was surprised I didn’t find it before. It is from 2012 but sounds as fresh as yesterday!  It is pure goodness!

I can hear this song being covered by other artists in the future in a big way. And it is also a great candidate for a Christmas movie soundtrack. 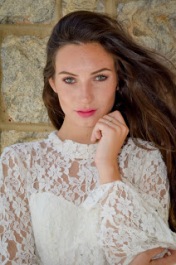 The rich warm acoustic guitar played by song co-writer Kip Williams starts the song out accompanied by Katie’s naturally pure and very tuned vocals and with the snare brushes and brush hits that give it a light and smooth feel.

Katie’s vocal gives a rich, warm, and enchanting beginning to the song that when the chorus kicks in knocks you out with a fantastic hook that will be stuck in your head for life.

As the song progresses from the perfect opening sparse arrangement, more instrumentation comes in and the bass picks things up a notch and never lets it back down.

With dramatic vocal pauses before the chorus, the song is well arranged and puts the “Merry” into Merry Christmas.

The song will fill you with feelings of jubilee and bright cheerfulness washing away any kind of sadness that sometimes come to many this time of year. The song is like an escape into merriment and blissful joy.

On Thursday, January 21, 2016, Barley Station will release a new single titled “Like Destiny”.  Blending folk and rock with progressive beats and pop sensibilities, this one has been called the best yet by those who have heard the song. The song will be available at most digital retail outlets.

Here is a sneak peek of the album art:

Snippet from a Pre-release review:
“You’ll want to find a pretty spot under the old oak tree by the river and let Barley Stations new single ‘Like Destiny’ flow right through your soul.

“The unique instrumental in the song pairs perfectly with Vocalist Randy Wayne Belts ‘tranquil fluid motion’ vocals transcending one into a heavenly place of peace also known as: bliss… Infectious and pretty, this song is one for the iPod ‘favorites’ playlist for sure!”
~CA Marshall editor of Starlight Music Chronicles and Magazine

Review and Interview with Olivia Penalva

As a connoisseur of original Christmas music it’s always great to find something new that is full of festive joy, delight, and fabulous vocals!   “Christmas For Two” by Canadian recording artist Olivia Penalva is just one of those songs.  With a fresh clean sound that has a somewhat Jazzy and R&B old motown rhythmic feel combined with a very contemporary vocal and lyric, Olivia delivers a song that reminds us of the joy of the season, and just enjoying life and having fun.  It is the perfect Christmas feel-good song!

As a singer, not only on this song, but in all of her work, her voice  has a timbre and character that make one think of a voice like that of Andrea Wittgens, Nora Jones, or Colbie Caillat.  Olivia’s voice has a mature tonal quality to it and a special warmth with a sultry yet innocent character to it that will capture your heart and ears.

Perhaps it’s that innocence of youth that can best create the atmosphere of a joyous life-is-good Christmas song.

At a mere 15 years old, Olivia has already begun making a splash in music, and the addition of “Christmas For Two” to her repertoire will only further the ripples created by the waves she’s already making.

This new Holiday song has already gained some radio play alongside other well established artists with Christmas songs on this years Christmas playlists such as 103.5 QMFM in her home area of Vancouver, BC; Majic 100 in Ottawa, ON and more. But this isn’t her first airplay.

Then there is Miss Penalva’s recent single “Ferris Wheel”, a song that has a carefree atmosphere with a strong rhythm section, once again, giving a solid beat behind the song which is, more than less, a celebration of life.  With another powerful vocal performance, the song will simply leave you in a good mood!  The control she has over her voice allows her to naturally move around her notes and move in and out of vocal inflections with great ease.  This is a very note worthy song also garnering airplay support.

Another song I should mention is a song called “Forgettable” which Olivia co-wrote and collaborated on with a Canadian DJ Group called Project 46 who released it as part of their own album called “Beautiful”.  And indeed it IS a beautiful!  At this stage in her career, the music seems to be defined by strong rhythm section and very powerful vocals.

(Listen to “Forgettable” at this link:   https://soundcloud.com/djproject46/forgettable-ft-olivia-free-gift-info-below  )

So don’t shrug off the “fifteen years old” part because her voice is like that of an experienced 20-something, and one only needs to be reminded that when LeAnn Rimes came out with “Blue” and floored everyone with her mature sounding voice at age 14, they said the same thing with a similar “Wow” effect.  Her voice simply commanded respect and admiration.

So naturally, one of the questions I wanted to ask leads right into my interview: